Retinoic acid-inducible gene I —commonly called RIG-I— belongs to a class of helicases, in particular the DExD/H box RNA helicase class. It is part of the RIG-I-like receptor family of helicases and encoded by the human gene DDX58. RIG-I inhabits the cytoplasm and is found in low levels in most mammalian cells. Its concentration increases in response to interferons. Structurally, RIG-I is related to dicer, which plays a central role in mediating RNA interference. RIG-I has been shown to activate the inflammasome and induce IL-Iβ production.

Apart from its RNA helicase domain, RIG-I also contains two N-terminal CARD domains. ‘CARD’ domains are caspase activation and recruitment domains. As the name implies, once active CARDs travel and bind to other CARDs which are attached to mitochondrial antiviral signalling proteins (MAVS). Ultimately, this leads to the activation of the type 1 IFN signalling pathway. RIG-I also contains a C-terminal repressor domain (RD). The three distinct domains are outlined visually below.

Once RIG-I is activated, it hydrolyses ATP and changes conformation to open its RNA binding domain and release signal-inducing CARDs. RIG-I signalling via MAVS also activates apoptosis in a caspase-8 dependent manner. 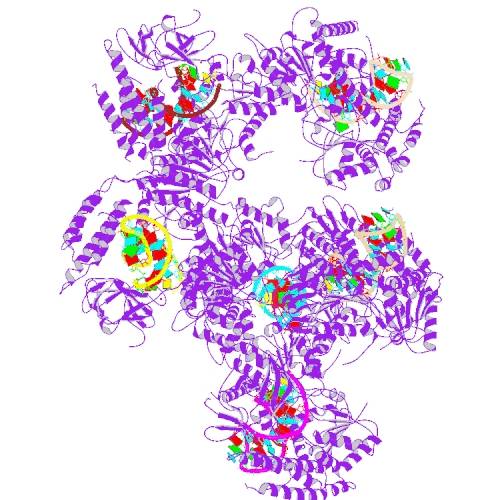 Fig 1. The crystal structure of human RIG-I in complex with Cap-0 RNA (adapted from PDB)

In short, the primary function of RIG-I is to detect cytosolic dsRNA. Under homeostatic conditions, dsRNA is a rare phenomenon and is thought to have a primarily regulatory role. The unique features of dsRNA, both in its ribose sugar group (which bears an extra hydroxyl group compared to deoxyribose) and the nucleotides used (RNA bears uracil in place of thymine, and uracil lacks a methyl group in comparison), contribute to its role as a PAMP.

PAMPS, or pathogen-associated molecular pattern, are a large and varied class of small molecular non-self motifs which are consistent across classes of microbes. dsRNA is a robust PAMP, and reliably triggers gene silencing in vertebrates as well as invertebrates and plants. Generally, such genes are silenced via sequence-specific degradation of the target RNA.

RIG-I in the Innate Immune Response

The innate immune system is an old and evolutionarily conserved set of defences which act non-specifically to protect an organism from pathogens. This includes such physical barriers as skin and hair, as well as more complex features like mucosal secretions and complement activation. Generally, any non-self particulates can become targets of the innate immune response. The cells of the immune system play roles in both innate and adaptive immunity.

RIG-I, as an enzyme capable of recognising potentially harmful dsRNA that has infiltrated the host, is an important player in innate immunity. If a virus has co-opted cellular machinery to begin production of its own proteins or replicating its own genetic material, dsRNA which reaches the RIG-I in the cytosol will be detected. This PRR binds to viral RNA to start the process of immune activation. Non-traditional potential ligands of RIG-I (including specific sequence motifs, varying PAMP lengths, presences of 5’ caps, and single vs. double strand RNA) are still being elucidated. 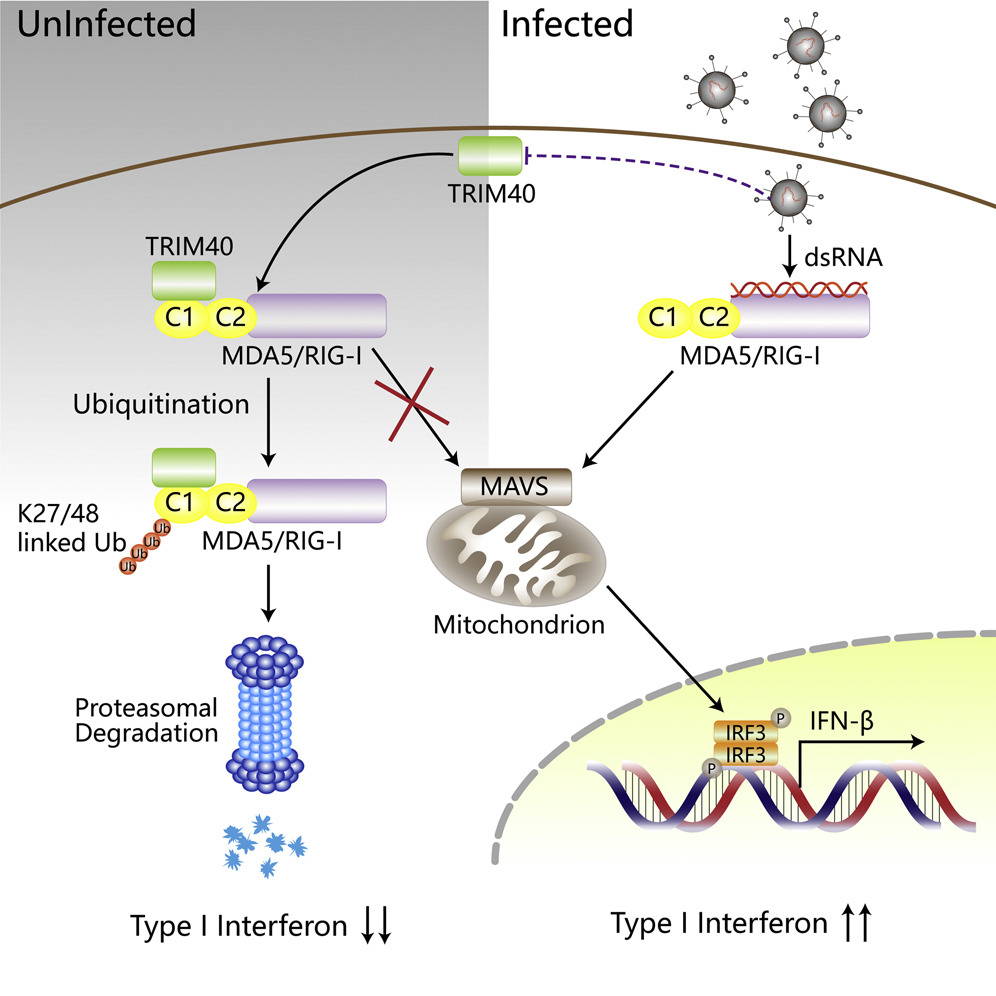 Once RIG-I recognizes dsRNA as a PAMP, it initiates a signalling cascade which produces an inflammatory response.

Once IFN-α and IFN-β are present in the microenvironment, they act in an autocrine and paracrine fashion on IFN1 receptors to induce further production of type 1 interferons. The positive feedback loop that this creates increases the potency of RIG-I’s antiviral effects. Further spurring the immune response is the activation of the JAK/STAT pathway by type 1 interferons, which begins the process of signalling more systemic inflammation by recruiting cytokines and immune cells.

SARS-CoV-2, the causative viral agent of the global pandemic COVID-19, is a positive-sense single-stranded RNA virus. Coronaviruses are a large family of viruses, many of which can be detected with RLRs (RIG-I-like receptors), but some of which have also evolved to avoid detection by such innate immunity measures. RIG-I-like receptors (RLRs) include RIG-I, MDA-5, and LGP2.

The RLRs RIG-I and MDA-5 have been shown to be important for activating innate immunity and IFN1 production in murine models of certain coronaviruses. Where RIG-I prefers short dsRNA sequences with 5′-phosphates, MDA-5 preferentially binds long pieces of dsRNA. In fact, a deficit of either RLR can significantly impact IFN-α and IFN-β production.

Coronaviruses are somewhat notorious for having developed innate immune evasion strategies. Coronavirus genomic RNA is known to contain a 5’ cap moiety which blocks RIG-I. Thus, it is thought that replication intermediates or related motifs are instead detected by RLRs in cases of coronavirus infection. MDA-5 may detect the replicating genome dsRNA products.

Similarly, coronaviruses can encode a protease which inhibits ubiquitination of innate signalling molecules. This in turn prevents interferon induction. Notably the original SARS-CoV encodes a Papain-like protease, capable of inhibiting IRF3 activation by deubiquitinating RIG-I and other associated factors. MERS-CoV infection produces a protein called 4a which can suppress the RIG-I and MDA-5 activator PACT, thus preventing RIG-I from generating a signal.

This innate immune evasion extends to SARS. The M protein (one of the four integral proteins of coronaviruses) interacts with RIG-I and TRAF, and prevents TRAF from mediating its downstream effects on IFN signalling induction. Anti-IFN activity is mediated by the membrane (M) protein’s first transmembrane domain at the N terminus in SARS.

There is evidence that CpG and UpA are targets of the innate immune response to viral infection. The presence of these pairs causes RNA degradation and RIG-I mediated IFN production. Thus, their downregulation is cause for concern and may be a contributing factor in delayed type 1 IFN production and the dysregulated immune response that is reported in COVID-19. Elderly patients were reported to have dysregulated RIG-I signalling, which could contribute to the increased disease severity and mortality rates in elderly patients.

What’s in a name?  RIG-1 (retinoic acid inducible gene-I) is called such because its mRNA expression was observed to be highly upregulated in the all-trans retinoic acid (ATRA)-induced maturation of acute promyelocytic leukemia (APL) cells!