What is 3D Cell Culture?

What is 3D Cell Culture?

Of all the culturing models used today in drug discovery, none have shown more promise in the field of cancer research than three dimensional cell culture models. Especially in the study of cancerous cells, tumor spheroids composed of cell aggregates can be a remarkable tool to better assess the in vivo efficacy of interventions before they move to trials in non-human animals. A 2014 study on breast cancer is a powerful example of how such culturing techniques can model the heterogeneous tumour microenvironment.

In diseases such as cancer, re-creating the correct microenvironment is important for assessing the true efficacy of drugs and other intervention methods (Source). In a 2D culture environment, cells do not have the same communications with their surrounding neighbours, or with the extracellular matrix. In a 3D environment, these interactions can be readily modeled and studied more reliably.

As displayed above, a major advantage in using 3D cell culture is that it is a better model for in vivo tissue environments and interactions.

To date, a major drawback to the usage of 3D cell culture has been a lack of reliable assays, and that the assays which did exist required destruction of the organoid or structure being studied. However, the drawbacks for 3D cell culture usage have been addressed with the production and usage of new, improved cultivation methods and assays. Similarly, the issue of low batch-to-batch variability has been corrected with additional features in scaffolds and matrices, and new studies showing the validation of these procedures (Source).

The basement membrane is a fibrous extracellular matrix which serves as a boundary and as an adhesion platform in mammals. Our 3D Cell Culture Matrix BME Kit contains a basement membrane matrix and wash buffer to allow for the cultivation and measurement of 3D spheroid growth. Our 3D Cell Culture Ready-to-Use Scaffold Complete Kit contains an enzyme-free scaffold dissociation solution, neutralisation buffer and ready-to-use scaffolds in a 96-well plate form. 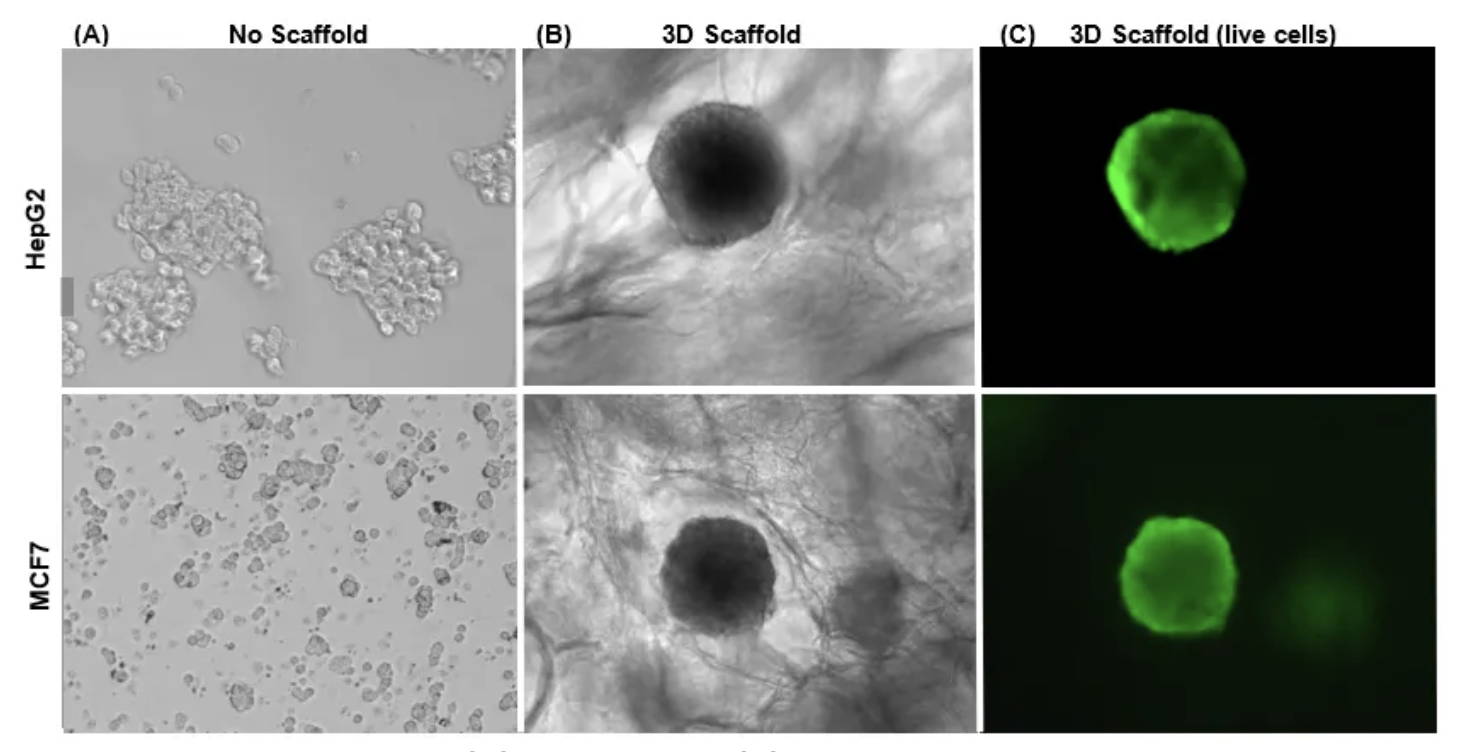 Fig 1. Growth of HepG2 cells and MCF7 cells with no matrix vs. a matrix scaffold. Upon Calcein AM staining, cell viability was found to be unaffected even during long term matrix cultivation.

Our 3D Cell Culture Non-Enzymatic Cell Harvesting Kit is an ideal solution for the isolation of cells and spheroids from matrices. Unlike trypsin and accutase— two commonly used proteases for matrix degradation—the gentle, saline-based solution used in this assay is ideal for cells which may be sensitive to protease digestion. This is an important factor if the cells being cultivated are to be assessed on cell-surface protein or signalling, as proteases have a higher potential to damage these processes and alter such physiological assessments. Our saline-based solution is optimised and standardised for the complete dissociation of matrices, especially those from our own cell culture kits.

The isolation of cells and spheroids from their matrix is a key step in the terminal assessment of cell passaging, biochemical processes, or protein analysis. Isolating these cells with a high viability rate for subsequent biochemical, protein and cell-based analysis is made possible with the use of this kit.

The 3D Cell Culture HTS Cell Viability Assay Kit assay uses gentle non-radioactive, non-enzymatics methods to test for viability in a sample. This assay kit provides a quick, user-friendly and high-throughput screening method for characterising and screening cell viability, cytotoxicity and apoptosis. Our kit provides a standardised fluorometric method for sensitive quantification of cells, which can detect as few as fifty viable cells in a well. It is suitable for assessing cell proliferation, cell viability, chemotaxis, cytotoxicity, and apoptosis. The kit contains a matrix dissociation saline solution, viability assay buffer, Calcein AM, and is compatible with all mammalian cell types.

Once the matrix and spheroid dissociate from the 3D culture, cell growth can be assessed. Similarly, the kit allows for the measurement of cell viability in response to growth factors, cytokines, mitogens and nutrients. The effects of cytotoxic or cytostatic compounds— such as anti-cancer drugs, toxic agents, or other pharmaceuticals which may influence cell growth or spheroid formation— can be measured.

Adenylate kinase is a ubiquitous protein which is present in the plasma membrane of all eukaryotic and prokaryotic cells. Upon damage to the membrane, this protein is released into the culture medium. Thus, AK is a powerful indicator of cytotoxicity, and can also be used as a proxy for the measurement of viability.

The GenieGlow Cytotoxicity Assay Kit is a quick and sensitive assay to measure cell viability in a three dimensional model when combined with 3D Cell Culture Non-Enzymatic Cell Harvesting Kit.

Lactate Dehydrogenase (LDH) is a stable enzyme which is quickly released into cell culture medium upon damage to the plasma membrane. It is present in all cell types and so is a strong indicator of cytotoxicity. A well-characterized method of assessing cytotoxicity in 3D cell culture is simply removing the media present and running the assay on a 96-well plate.

Our high-throughput LDH cytotoxicity assay is useful for estimating biomass, counting cells, and determining the health of cells and tissues. LDH is widely used for cytotoxicity testing in cultured cells as well as viability testing.

XTT cell proliferation assays use the water-soluble yellow tetrazolium salt XTT to detect cellular metabolic activity. During the assay, yellow XTT is reduced to a highly coloured formazan dye by dehydrogenase enzymes in metabolically active cells. Since this conversion occurs only in viable cells, the amount of the formazan produced is proportional to the number of viable cells in a sample. The formazan dye created in the assay is soluble in aqueous solutions and quantified by measuring the absorbance at a 450 nm wavelength using a spectrophotometer. Ultimately, the dye absorbance is proportional to the number of metabolically active, viable cells in each well. (Source)

Our XTT Cell Proliferation Assay Kit is optimised for high throughput assays, and requires no washing or other steps that could cause cell loss or variability. Our kit is not radioactive, and is ideal for the quantification of cell proliferation and viability in response to pharmaceutical, chemical, nutritional, and environmental interventions.

WST-1 is a compound used for the colorimetric assessment of cell viability. This reagent provides a simple and accurate method to measure cell proliferation, which is based on the cleavage of the tetrazolium salt WST-1 to formazan by cellular mitochondrial dehydrogenases.

Expansion in the number of viable cells results in an increase in the activity of the mitochondrial dehydrogenases, which leads to an increase in the amount of formazan dye formed. The formazan dye produced by viable cells can be quantified by measuring the absorbance at 440 nm. This method is non-radioactive, rapid and more sensitive than MTT, XTT, or MTS-based assays.

Currently, WST-1 is the most sensitive assay for viability available. Read more about our protocol on WST-1 Cell Proliferation Reagent here.   The assay can be performed in the same microtiter plate, and requires no extra steps ( washing, harvesting, cell solubilization, etc.).

WST-8 (also called CCK-8) is the newest, most evolved form of viability testing. It has recently been shown to be considerably less toxic than its predecessors MTT, XTT, and WST-1. (Full article here) In fact, as WST-8 is an assay which works extracellularly, it is functionally non-toxic. WST-8 tetrazolium salt is reduced by cellular dehydrogenases to an orange formazan product that is soluble in tissue culture medium. Formazan can then be measured with a spectrophotometer to determine the proportion of cells which are metabolically active, and thus viable.

After the assay is finished, the cells can be washed and reused in monolayer form.